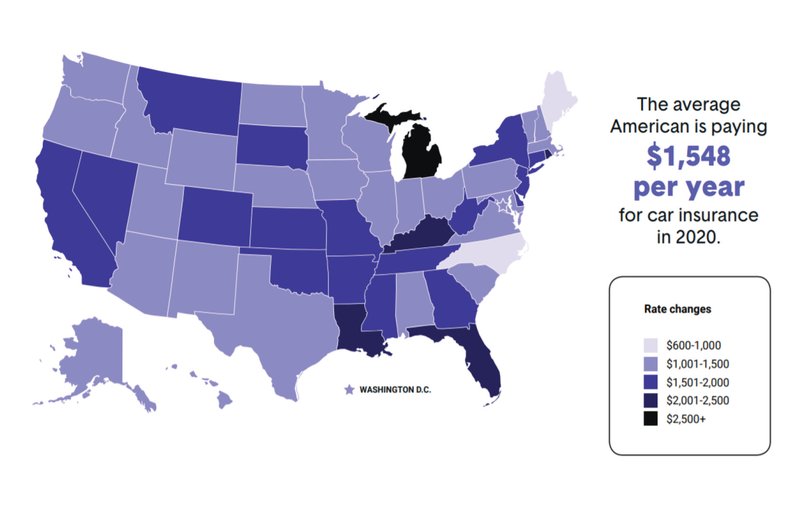 One of the primary factors used in car insurance pricing is location. Average car insurance rates by state tend to vary based on legal regulations and insurance companies’ efforts to price accurately based on these differences.

For instance, drivers in no-fault states such as Michigan and Florida often pay more for insurance than do drivers in other areas of the country. Dive into the details and compare auto insurance rates by state below!

What are the cheapest states for car insurance?

In general, less-dense states — and those with drivers qualifying as low-risk — enjoy the cheapest car insurance rates. Many of America’s most affordable car insurance states are low-density locales such as Idaho, Utah, Maine, Vermont, and Iowa. The cheapest US region for car insurance is New England ($1,224 per year), followed closely by the Great Plains ($1,290).

What are the most expensive states for car insurance?

The states with the highest auto insurance rates are Michigan, Louisiana, and Rhode Island. Two of these states — Michigan and Kentucky — are no-fault car insurance states, meaning every driver involved in an incident pays for their own injuries and damages.

In states with no-fault laws, car insurance companies raise rates to account for the added financial risk they bear. Louisiana’s rates are atypically expensive due to its high number of uninsured drivers and its tendency to sustain damages via floods and hurricanes.

10 MOST EXPENSIVE STATES FOR AUTO INSURANCE

Kentucky drivers were among the lucky few Americans to have received a price break on insurance over the past year, as the state improved from third to sixth on the least-affordable list. Drivers in Florida, Delaware, and California endured rate hikes, while New York supplanted Mississippi on the list of most expensive states.

The priciest US region for auto insurance was the Southwest, with Texas and Oklahoma among the most expensive states.

Many elements lead to a state’s average insurance rates being expensive, chief among those:

Use The Zebra's auto insurance rate engine to get more specific than car insurance by state and find an insurance policy today!

Compare over 100 insurance companies at once!