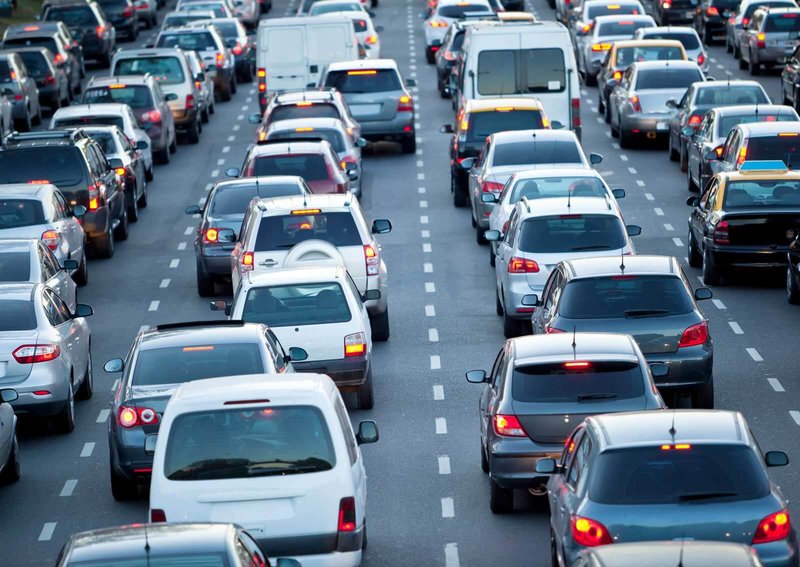 Although remote work is growing more popular, the majority of Americans still drive to work every day and 76 percent make the trip alone. Commuting to work usually isn’t the highlight of anyone’s day, especially when the average one-way commute is around 26 minutes. Most of us see those precious minutes as lost time we could spend doing other things. Whether it's disdain for traffic or just a waste of productivity, most of us would agree that a shorter commute could make us happier.

Studies show commuting can take a toll on your health, causing stress, anger, and social isolation. Commuting has other costs, including gas, tolls, car insurance, and maintenance (looking at you, new windshield crack). If commuting is so terrible, would people accept a lower salary in return for a shorter trip to work?

To find out what Americans would be willing to give up for a shorter commute, we surveyed 1,000 people to learn how much they value that extra time in the morning.

The median salary for US workers in 2019 is roughly $47,372, or $22.78 per hour, assuming a 40-hour workweek for all 52 weeks of the year. If the average commute is 26 minutes one-way, that means people are spending an average of 260 minutes on the road per week and this number may be higher if you live in a heavily congested city. If we take away three weeks for vacation or sick time, that total comes to 12,740 minutes each year or 212 hours. That total comes out to $4,829 spent commuting to work per year, given the national median salary. 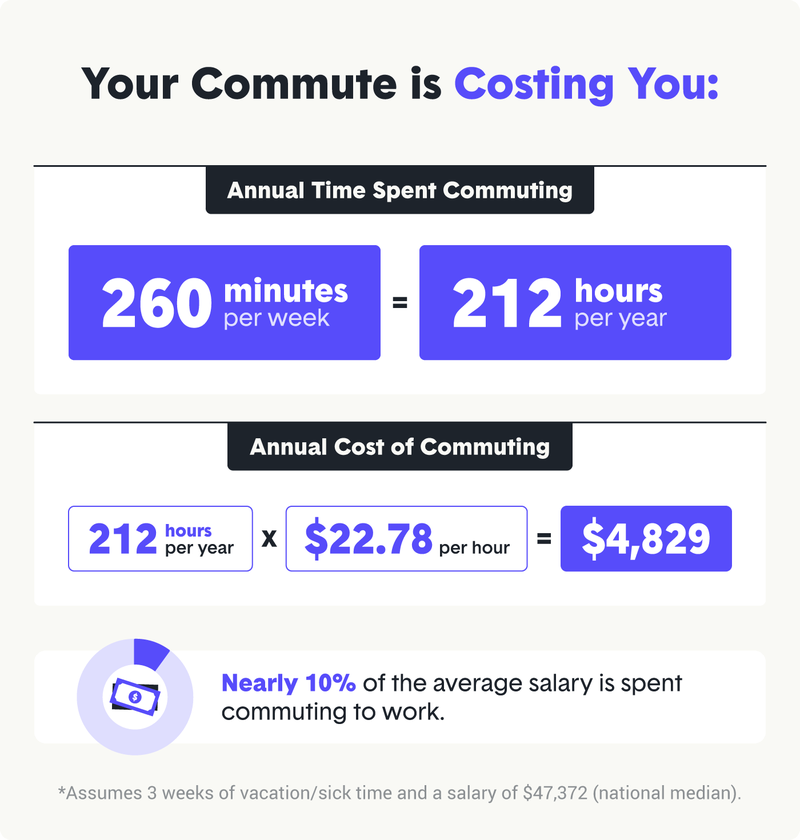 If your time, energy and sanity seem more valuable than those minutes spent in the car, you could consider moving closer to your workspace or negotiating work from home days to reduce that lost time. Alternatively, you could find a different position closer to your home even if it means taking a slight pay cut. 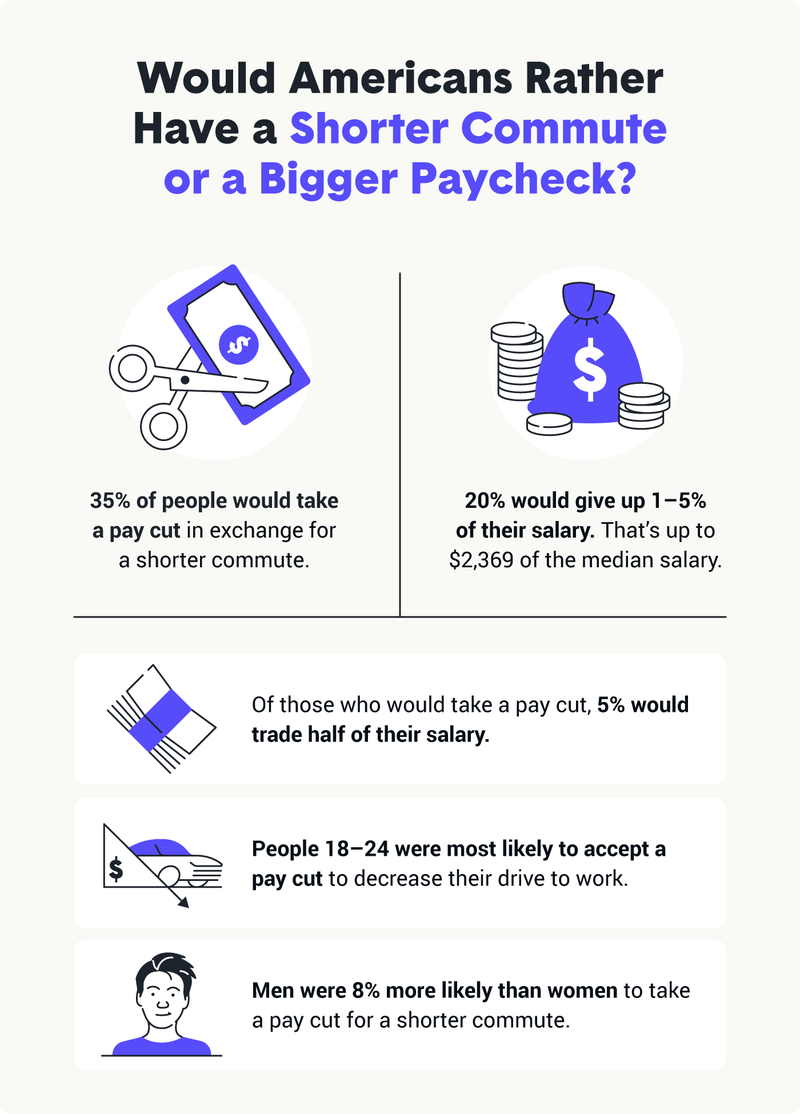 Why do people want a shorter commute? Sleep.

Our survey found that if given a shorter commute, people would use the extra time to sleep rather than spend time with family or a partner. That isn’t the worst idea either since more than one-third of the US workforce is sleep-deprived. Some would trade a shorter commute to exercise while others reported they would use the extra time to meal prep, read and even do yard work. Not surprisingly, only five percent said they would use the time to get a head start on work for the day. 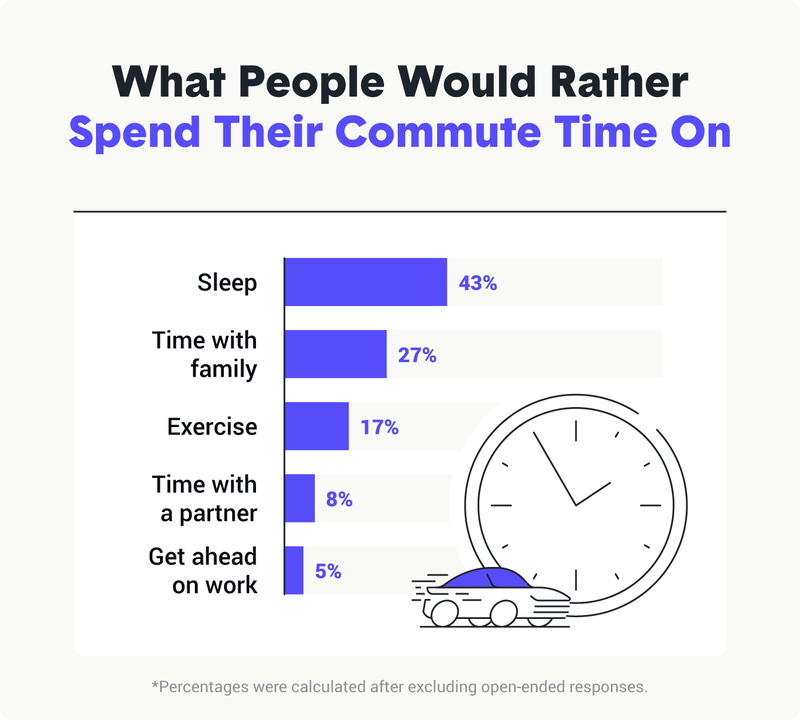 Commuting doesn’t have to be a waste of time or cause of stress. If you can’t find a way out of cutting your commute time, find an activity you enjoy to help reduce frustration and make the most of your time. While you can’t always cut your commute, you may be able to cut down on your car insurance rates by finding a better deal.

Ava worked in the insurance industry as an agent for four-plus years. Currently providing insights and analysis as one of The Zebra’s resident property insurance experts, Ava has been featured in publications such as U.S. News & World Report, GasBuddy, and Yahoo! Finance.