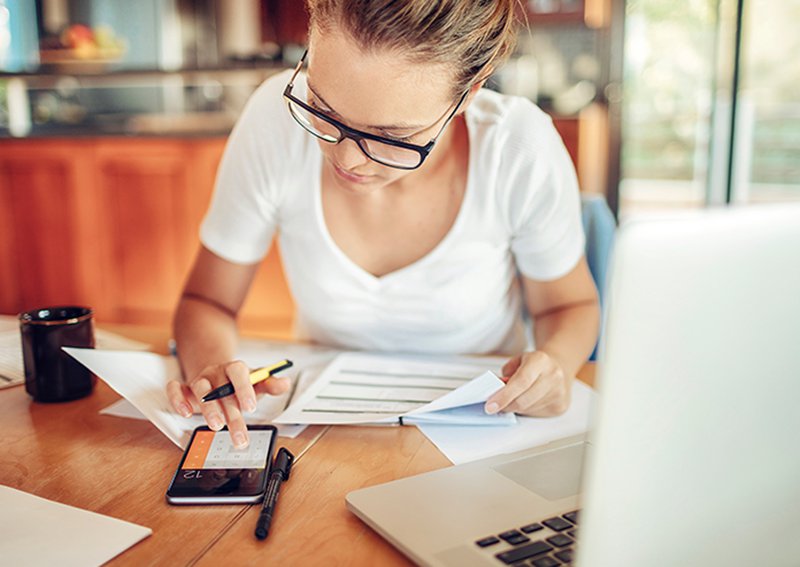 Millennials are often associated with less-than-stellar stigmas. However, this collective group of individuals — those born between 1981 and 1997 — is currently the largest living generation, and a major influence on the health of our economy.

Often characterized as “lazy,” “entitled,” and even “demanding,” millennials come out of the gate with much to prove. One of the biggest stereotypes surrounding the generation is its members' emotional and financial dependence upon their parents. While this might not be totally off-base (24 percentof millennials reported receiving help from their parents with a bill or two), many millennials work hard, earn their own money, and even want to invest it.

We polled more than 3,000 Americans between the ages of 18–34 and found the following:

Despite the negative stigmas, our findings showed a large percentage of millennials valued owning a car, and even intended to make payments without the help of an older individual...they’re just a little confused as to what it might actually cost them.

Do millennials think paying off a car is a worthy investment? 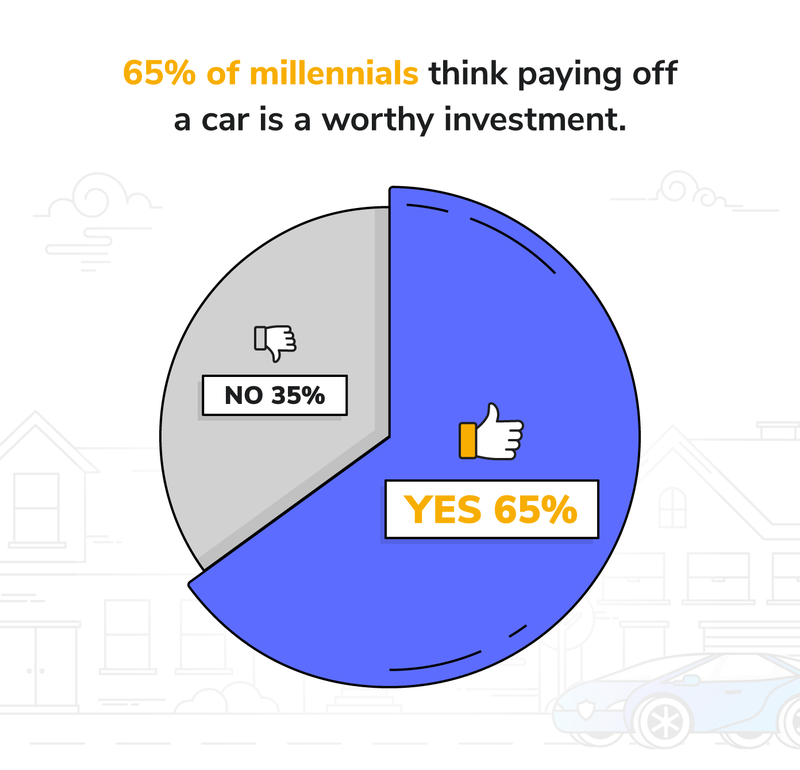 The short answer is yes.

Millennials do think paying off a car is a worthy investment. More than half of those polled (65 percent) believed it was in their best interest to not only have a car, but also to invest in one. Though both womenandmen replied this way, women were 12 percent more likely to consider it a worthy investment than men.

In fact, millennials are taking out auto loans more often than did previous generations. This is due in large part to advances in technology, making the car-buying process quicker and more efficient. Also, the ability to take out a six-year loan has afforded this younger generation more financial flexibility when purchasing a vehicle. We’ve seen a significant uptick in the number of young people aspiring to car ownership, especially in sprawling, car-dependent cities. 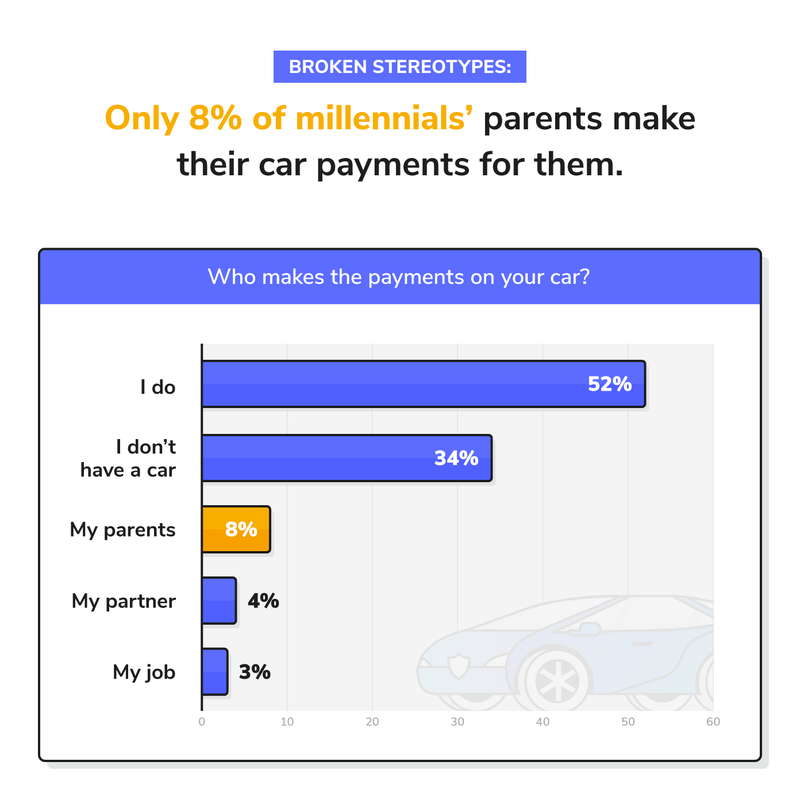 Here is where we see the millennial stigmas shattered. While it’s widely believed that millennials don’t foot many of their own bills, we found this to be untrue in the case of cars. Only 8 percent of millennials said their parents made their car payments for them. In fact, more millennials reported not having a car than said their parents made car payments on their behalf. More than half (52 percent) said they paid for their cars out of their own pocket. Of those that did, most (59 percent) were in the older age bracket (25–34 years), compared to 43 percent in the 18–24 age bracket.

What are millennials willing to spend on a monthly car payment? 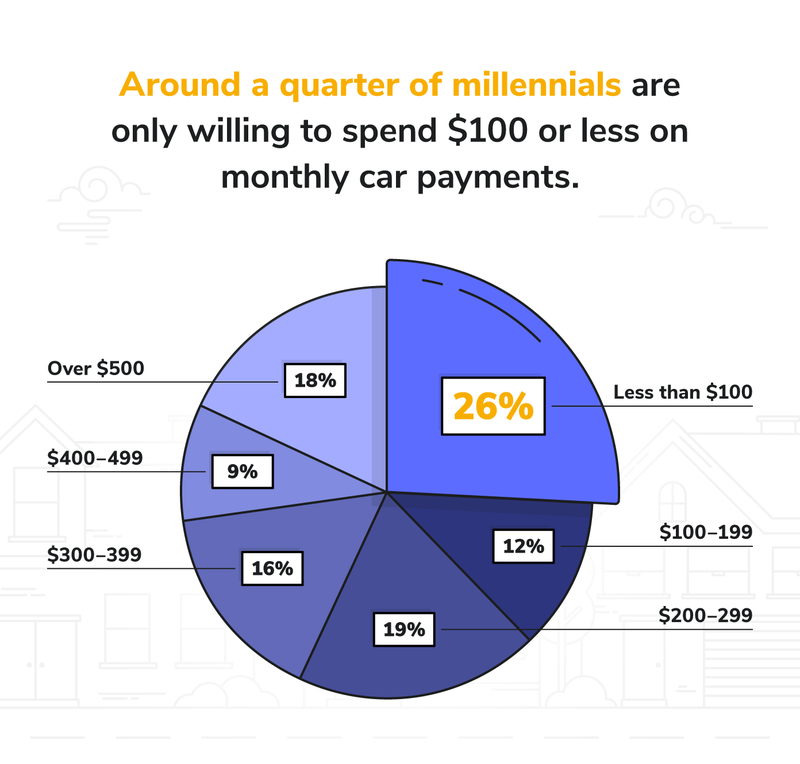 While we send kudos to all millennials who are — or intend to — make their own car payments, a quarter of them have a skewed perception of what that might actually cost. We surveyed those aged 18–34 to gauge the maximum monthly outlay they’d be willing to spend on car payments. While the results varied, 26 percent said they’d be willing to spend no more than $100 per month. As most car owners can attest, it’s hard to find a driveable car at that price point. In fact, the average car payment in 2018 is more than $400 per month. It’s safe to say millennials expectations are a bit off.

Although many millennials preferred to spend $100 or less per month, the third-highest answer was $500 or more a month. This shows a large discrepancy between those who would pay little to nothing and those who would spend a good chunk of their income on a monthly car payment. 19 percent of those aged 25–34 said they’d pay over $500 a month, compared to just 13 percent in the 18–24 age bracket.

We calculated the estimated price it would cost to make each of those specific monthly payments for the duration of a six-year loan:

What kind of car can you actually drive for $100 a month or less?

While cars are on the market for less than $7,200, it’s important to note the safety repercussions that can come at this price point. Many vehicles at this price level will have high mileage, dings and scratches, less reliable brakes and engines, and can even utilize recalled parts. If you plan on financing a car for less than $100 per month, do ample research to ensure its safety and reliability. Follow some of thesetips for buying a used car:

It might surprise some that millennials think owning a car is a worthy investment. And while most seem to pay their own car bills, it’s interesting to note how little they’re willing to spend on monthly payments. Aside from the car payment, there are other significant expenses the come with owning a car:insurance, upkeep, gas and much more. The average car payment continues to rise year over year, so it will be interesting to see how this correlates with the importance and desire of owning a car in the years to come.