The Best and Worst States for Eco-Friendly Commuting 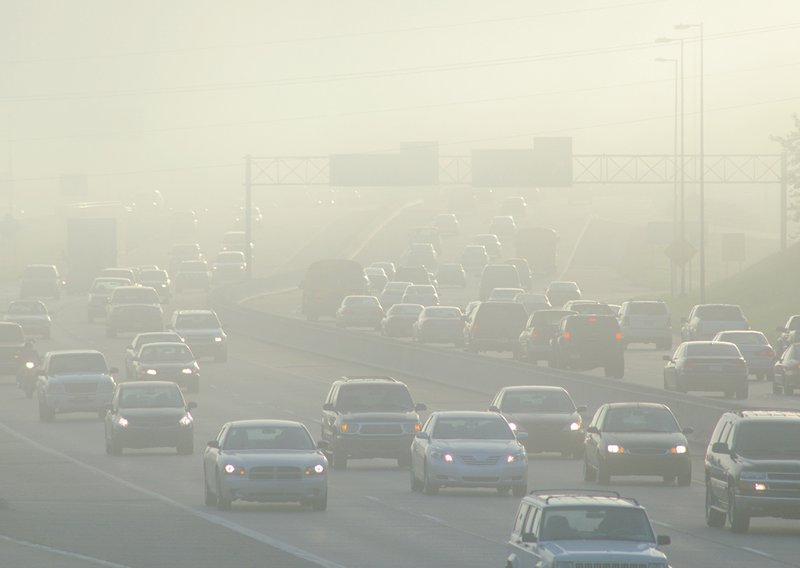 It’s no secret carpooling is good for the environment, but in major cities where life moves quickly, it’s not always possible. People keep different schedules, work on opposite sides of town, or simply prefer to commute alone. The emerging popularity of electric vehicles has helped to alleviate the burden of vehicular carbon dioxide emissions, but are people making the shift to lower their carbon footprint when they can’t carpool?

Ninety-nine percent of vehicles sold are gas-powered, making electric vehicles far less accessible. With charging stations relatively uncommon in some locations, these cars can be less than feasible for those in rural areas. While the next-best step is to share a ride with a friend, this isn’t always easy in remote areas.

The states in which commuters most commonly drive alone to work are some of the states with the fewest electric vehicles. This combination leads to a substantial carbon footprint. Below is a breakdown of the states creating the biggest impacts — both positive and negative — on the environment.

We analyzed US Census data to see how drivers in various US states commute to work — carpool versus driving alone — and compared this to electric vehicle adoption by state. We combined these rankings to calculate which states' driving habits have the best and worst impacts on the environment.

With gas-powered cars and trucks accounting for one-fifth of America's total carbon dioxide emissions, a small change, such as driving with a coworker, working remotely more often, or switching to a hybrid or electric vehicle, can contribute to a major change! Read on to see where each state stands.

The amount of CO2 burned per commute varies, depending on the length of the trip and the type of vehicle used. Longer commutes make a more substantial impact. If you have a job that requires you to travel long distances frequently, it may seem like there’s nothing you can to help.

How is our environment impacted by transportation emissions? The major concern involves the buildup of greenhouse gases — carbon dioxide, methane, and nitrous oxide — that heat the earth’s atmosphere. We’re already beginning to see how this process can change our climate. 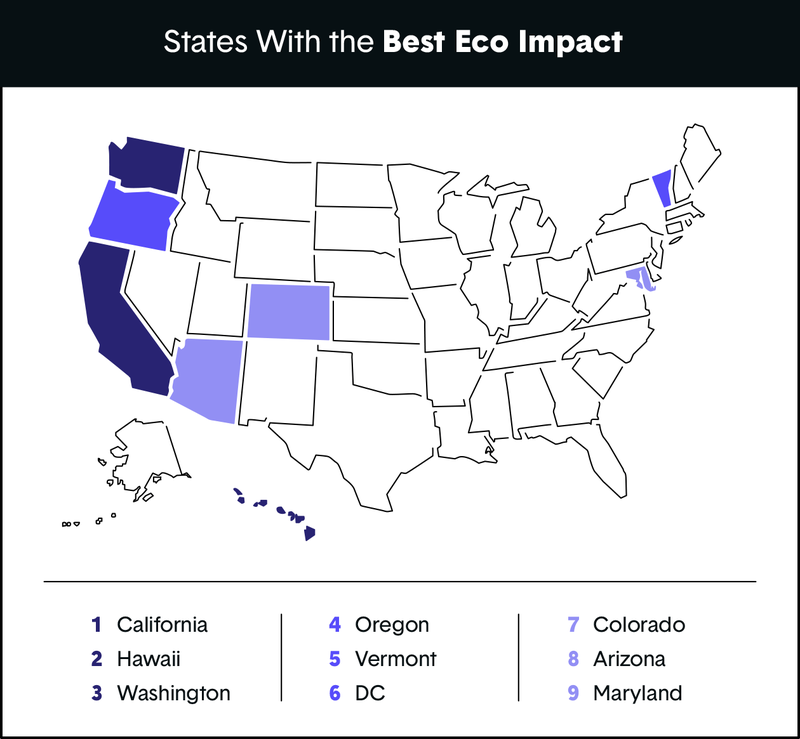 While California has taken measures to reduce its carbon footprint, a large portion of the Golden State's carbon emissions — 58.9 percent — come from transportation. California is pushing to reduce this by leading the US in electric vehicle adoption rate. 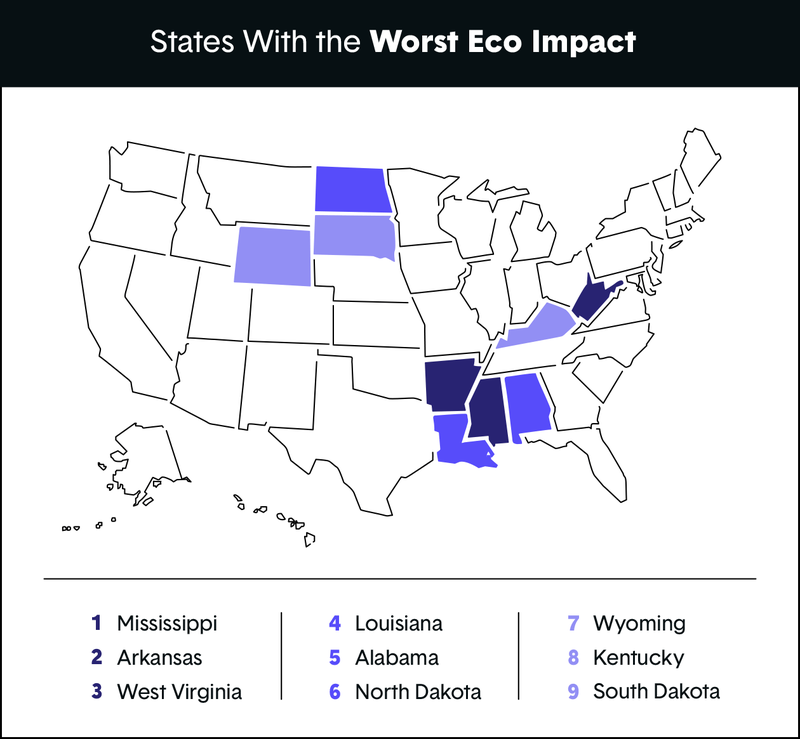 Wyoming's CO2 emissions rate is the nation's worst, at 112 metric tons per year. The state with the highest percentage of CO2 emissions from transportation is Washington, at 62.0 percent. These states should work to limit their environmental impact with their increase in carpools and electric cars.

States with the highest amounts of electric cars (California and Hawaii) and the largest percentage of people who carpool (Hawaii and Arizona) provide examples to other states of how they can soften the impact of transportation emissions on the environment.

Many states have recognized their environmental impacts and taken action to encourage the use of electric vehicles, with California recently approving a budget of $768 million on EV-charging infrastructure. However, many states need help making electric vehicles a part of their residents' daily lives.

The United States is the fourth-largest country in the world, behind Russia and China. Due to America’s vast size, each region — and every state — has its own transportation challenges.

What does this have to do with commuting? The landscape plays a large role in states’ commuting tendencies. This is evident in the clear distinctions between commuting habits by state: driving alone, carpooling and driving electric vehicles. 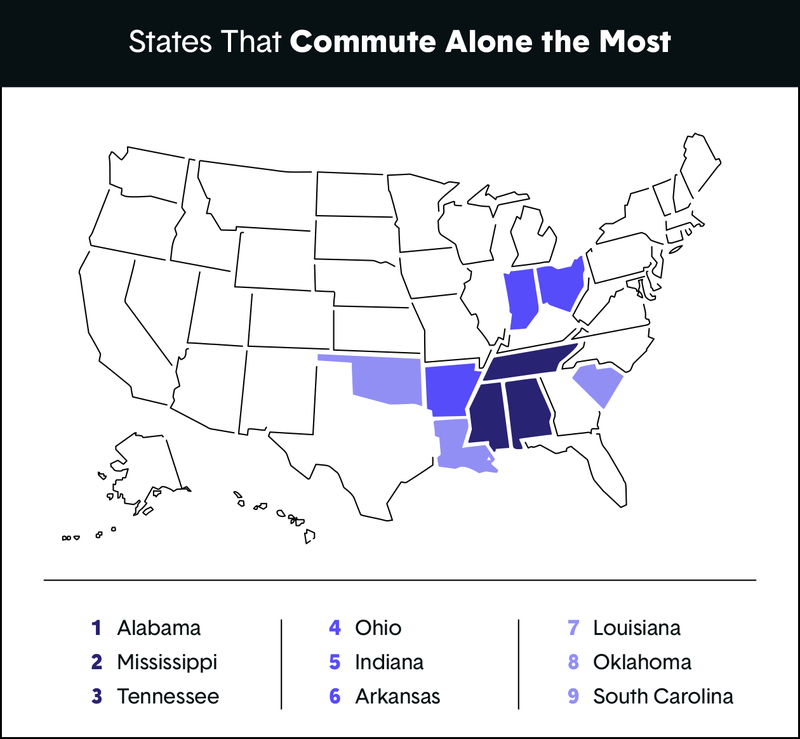 Those in more rural states, such as Mississippi and Kentucky, drive alone to work the most. In fact, Alabama has the highest percentage of solo commuters, at 86 percent. The majority of the land in these states is comprised of farms, forests, or prairies, meaning people typically live far from one another and the city.

Long commutes generate additional CO2 and make carpooling tricky. Furthermore, the lack of infrastructure for eco-friendly cars means that electric cars might not be prominent in these regions any time soon. 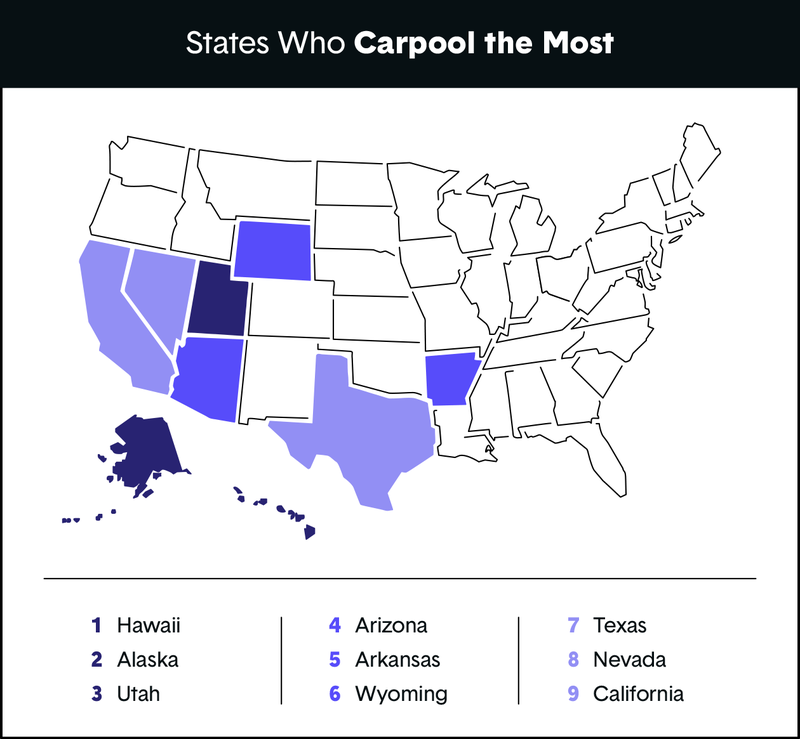 Almost 14 percent of commuters in Hawaii carpool, earning the island the title of most carpool-friendly state in the U.S. With such a small land mass, it only makes sense that Hawaiians commute together as they may live near one another.

California and Washington have comparatively high rates of carpooling, at 10.4 and 10.0 percent respectively. While these states are fairly large in size, they have major urban hubs such as Los Angeles, San Francisco, Seattle, and Spokane that lend themselves to relatively easy carpooling. 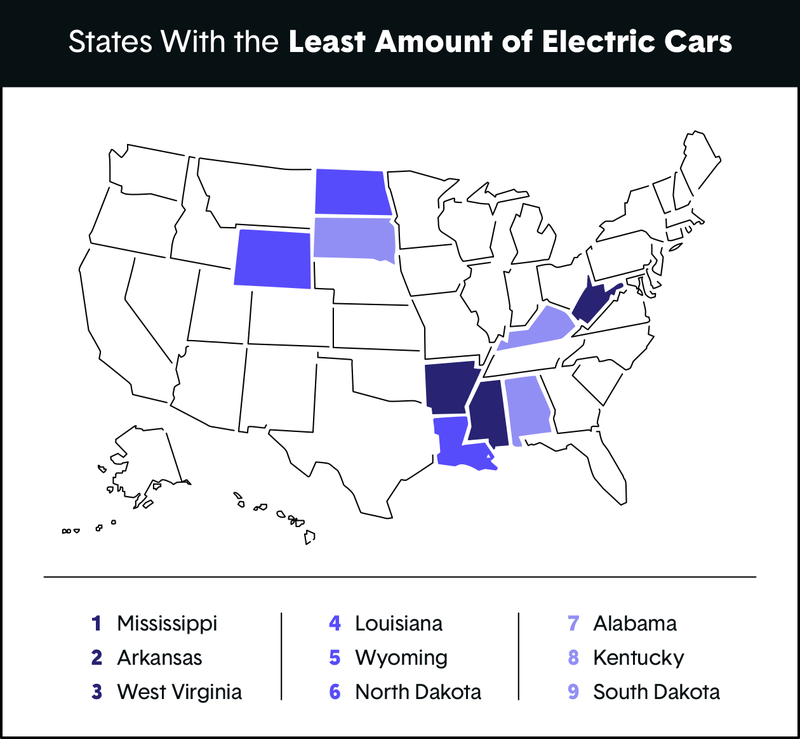 States with the fewest electric vehicles include Mississippi, Arkansas, West Virginia, and Louisiana. The shift to zero-emission vehicles (ZEV) remains prominent on the east and west coasts, leaving the southern and central states behind in the race to build electric-vehicle charging infrastructure, i.e., charging stations.

How to reduce your transportation carbon footprint

If switching from a gas-powered car to an EV is not feasible, you can aim to carpool once a week, ride a bike to work, or negotiate with your employer to allow for more frequent remote work sessions. These changes, though seemingly small, add up: one ton of CO2 is saved by driving 5,000 fewer miles per year. The more often you avoid commuting alone via gas-powered vehicle, the larger impact you can have on our carbon footprint. Another motivation to carpool or ride a bike more often is that you could save money on gas or stay active! It's easier to do these things more often when you have your friends or coworkers doing the same thing with you.

You can also look for a car with better gas mileage. Switching from a vehicle that gets 20 miles per gallon (MPG) to a 25-MPG vehicle cuts greenhouse gas emissions by 1.7 tons per year. If switching vehicles isn’t an option, make some simple changes to your driving habits to reduce the negative consequences to the environment.

It doesn’t hurt to make sure your car is tuned up and always prepped for a trip: keeping your tires at their optimal PSI increases gas mileage by five percent. These “eco-driving” habits may seem small. But remember, you’re constantly driving and you’re in your car almost every day. A slight change to your driving habits will benefit you and the environment in the long run.

Safety first! No matter how you’re getting to and from work, it’s important that you or whoever is driving you have an auto insurance policy to make sure you get where you’re going safely. Taking care of the environment is important, but so is taking care of you and your car!

Based in Austin, TX, Ava has been in the insurance industry as a licensed agent for 4-plus years. Ava is currently one of The Zebra’s resident property insurance experts and has been featured in publications such as US News Report, GasBuddy, and Yahoo! Finance.