What is distracted driving?

The exact definition of distracted driving is fairly straightforward: if you engage in an activity that takes your eyes off the road, you are driving distracted. From drinking coffee to checking on the kids in the rearview mirror, distracted driving is all too common, but it is incredibly dangerous. Like texting and driving, this behavior results in loss of the mental focus required to drive safely — even if you look away momentarily. Car crashes due to distracted driving number in the thousands — as the data shows — and thousands of lives are lost each year despite the fact that this negligence is entirely preventable.

Using national data from the National Highway Safety Association, the Center for Disease Control, and the American Automobile Association and other publically available resources, the true impact of this reckless behavior on American roads will be determined. Along with The Zebra's own proprietary data, we can better determine how we can better prevent distracted driving.

Following up from a survey conducted in 2019 by The Zebra, we analyzed the driving patterns of individuals categorized by their mobile device's operating system. 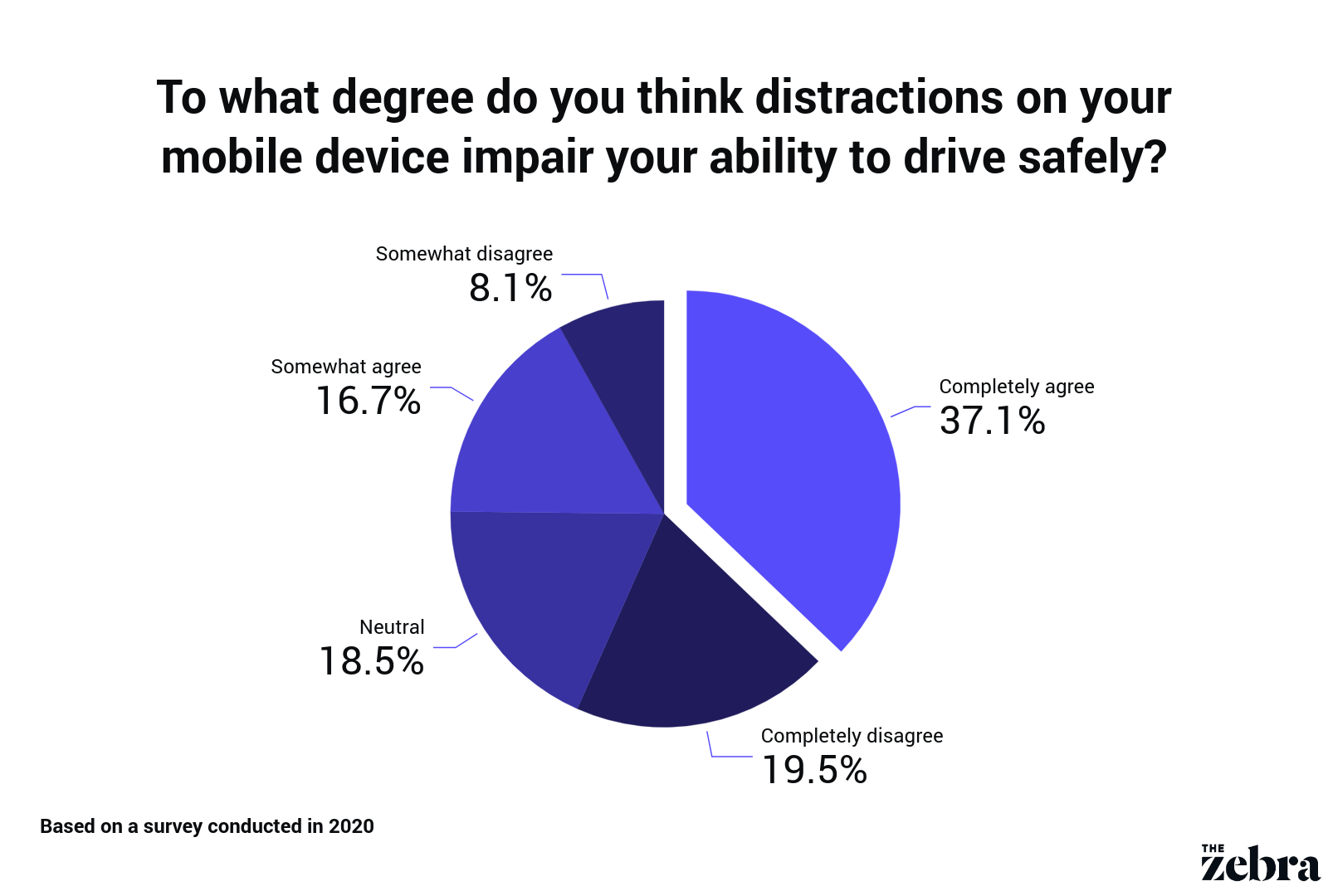 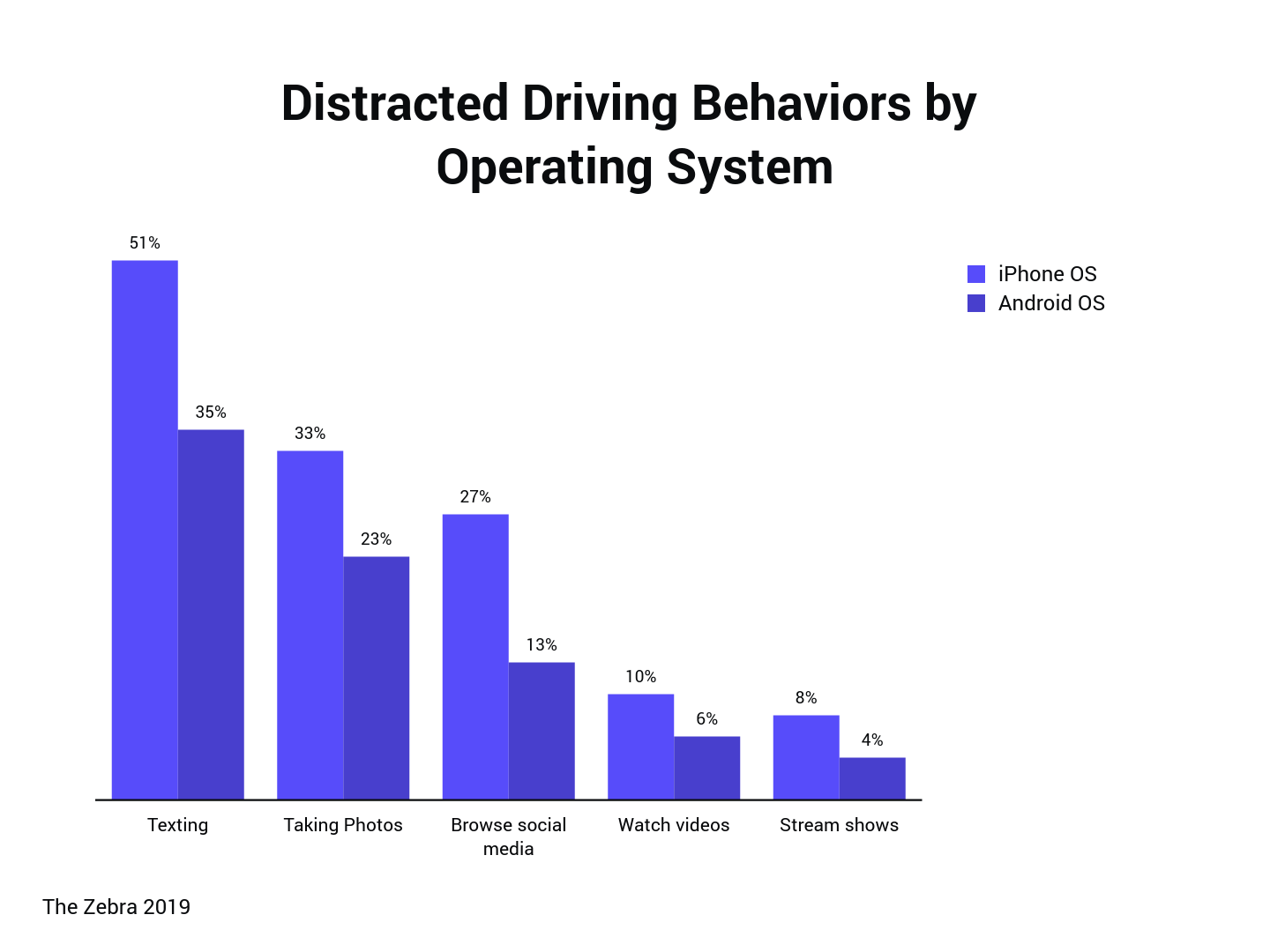 Texting while driving and cellphone use laws by state

The following data comes from Quartz and Zendrive. Please refer to their websites for additional information regarding the data below.

Based on Zendrive's data from 4.5 million drivers, all 50 states and D.C. were ranked based on drivers' percentage of driving time spent using their phone. Mississippi had the highest percentage with 8%, while the lowest was 5.2% for Oregon. Here are the top nine states:

According to the latest data from the NHTSA, the decline of motor vehicle fatalities is going down in 2019.

If this trend continues through the finalized data from 2019, the fatality rate would be the lowest in NHTSA history. Other NHTSA data states that roughly, nine people are killed and more than 1,000 injured daily in accidents in which at least one driver was distracted. Additional data incluldes: 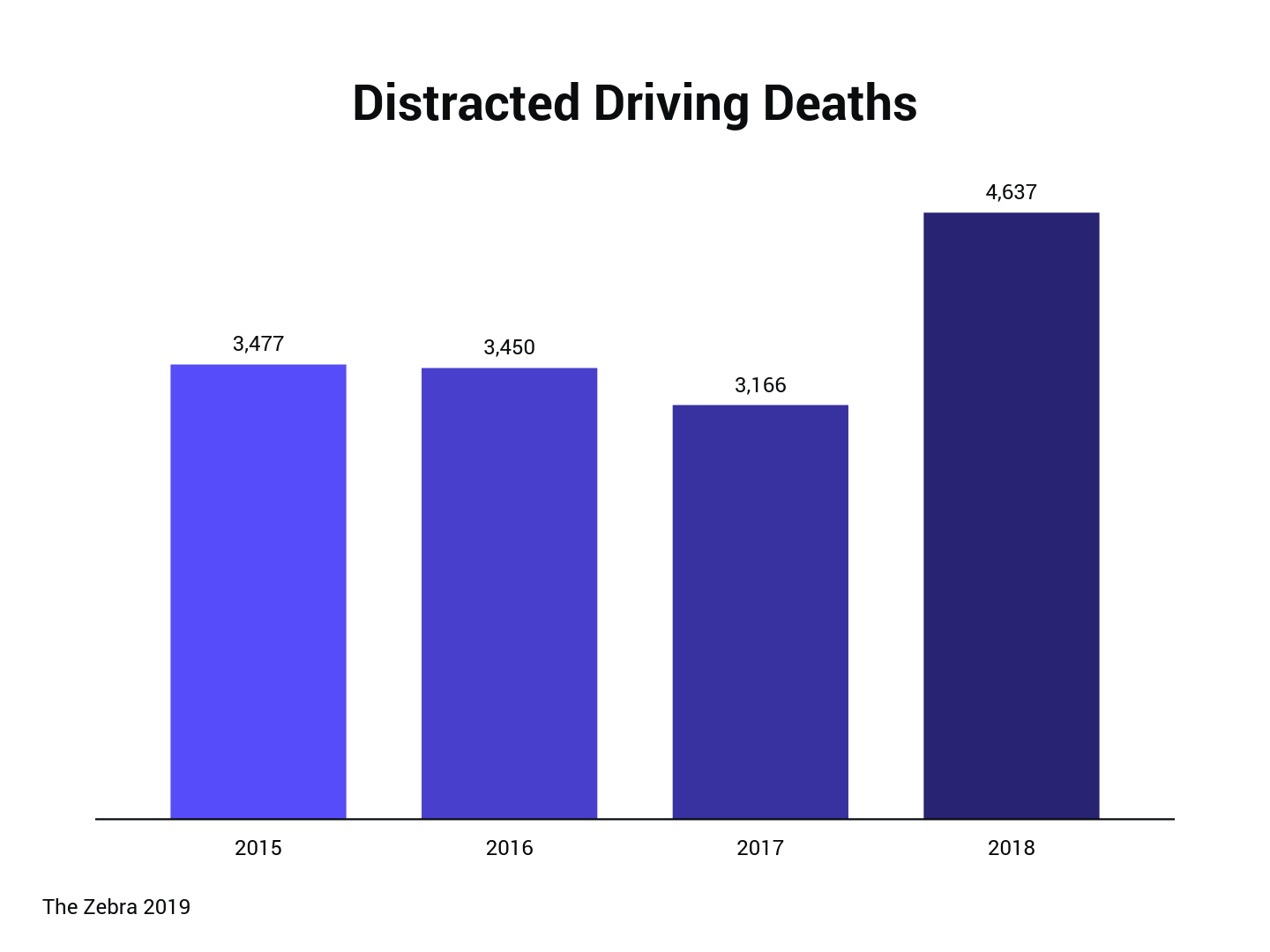 Getting caught texting or otherwise using your phone while driving will raise your insurance rate by an average of 23% ($356) — and in some states more than 63%. The penalty for distracted driving has increased notably in recent years as insurers learn more about the costs and more states create laws prohibiting it.

Read more about the methodology used to gather insurance rates.

What are the four types of distractions while driving?

The four types of distractions for drivers are:

What are the top 10 distractions while driving?

The top ten distractions while driving are:

What is a distraction while driving?

A driving distraction is caused by any activity that takes your attention away from the road. This includes taking your eyes off the road or your hands off the wheel.

What are the dangers of distracted driving?

Every type of distracted driving increases your risk of a car crash, injury, and even death. For example, reaching for an object increases a driver's risk of crashing by 800%.