How many people die from drunk driving each year?

Behind distracted driving, drunk driving is the number one cause of most car accidents in the US and, by far, the most deadly. Alcohol physically changes the brain's chemistry and inhibits common sense, fear, and motor skills. Put that combination behind the wheel of a two ton metal battering ram, capable of going a 100 miles an hour, and there's a recipe for disaster. Both young and old are susceptible to the belief that "only one drink won't hurt", as the data will show. Buzzed driving is drunk driving, and it is just as dangerous.

The Zebra conducted and collected research from the CDC, the NHTSA, and the DoT to give a complete and accurate look at the dangers and effects of drunk driving. Familiarize yourself with the data before ever considering to drink and drive.

Drinking and driving is a behavior that endangers the lives and increases the insurance costs of drivers across the United States.

The Zebra set out to explore the current state of American attitudes and behaviors toward drunk driving by conducting a survey of American drivers to determine their perceptions and self-reported habits. Using similar benchmarks and questions from a 2019 survey also by The Zebra, the results indicate that most American drivers recognize the dangers of drunk driving — a statement that has varied little from last year's survey with one notable exception: most people believe that millennials are most likely to drive drunk. 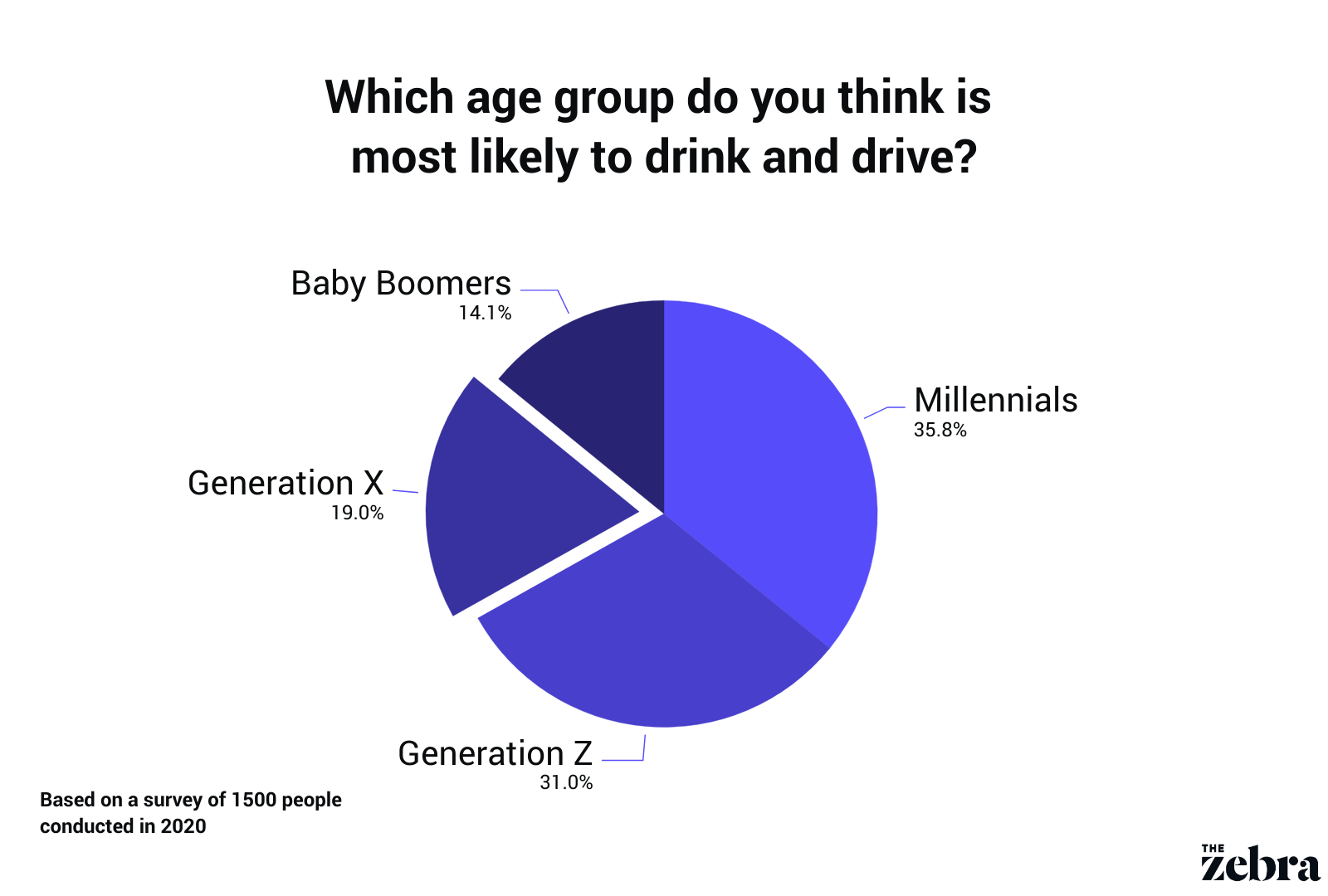 Other findings of this 2020 survey included:

In early 2019, The Zebra, the nation's leading insurance comparison website, launched a new survey to identify awareness around drunk driving behavior patterns and beliefs in drivers in the U.S. The below data, sourced from publicly available resources and The Zebra's survey, begins to paint a picture of US drivers' thoughts on drinking and driving. 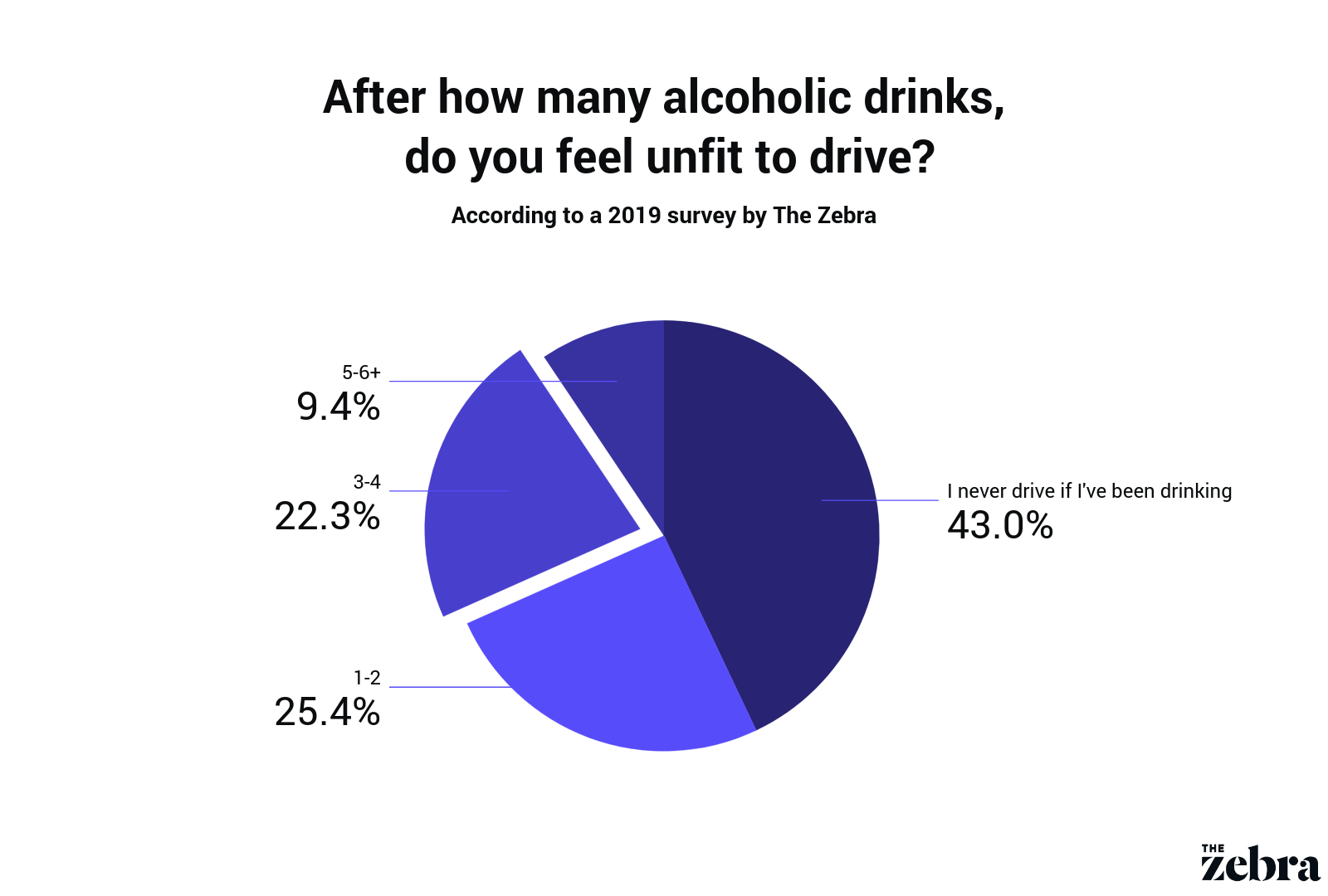 Between the years 2003 and 2011, there were 119,100 drunk driving fatalities in the United States. Here are the 16 states with the most drunk driving deaths during that eight year period:

Please refer to the NHTSA's Traffic Safety Facts and the Department of Transportation for additional data concerning the data below: 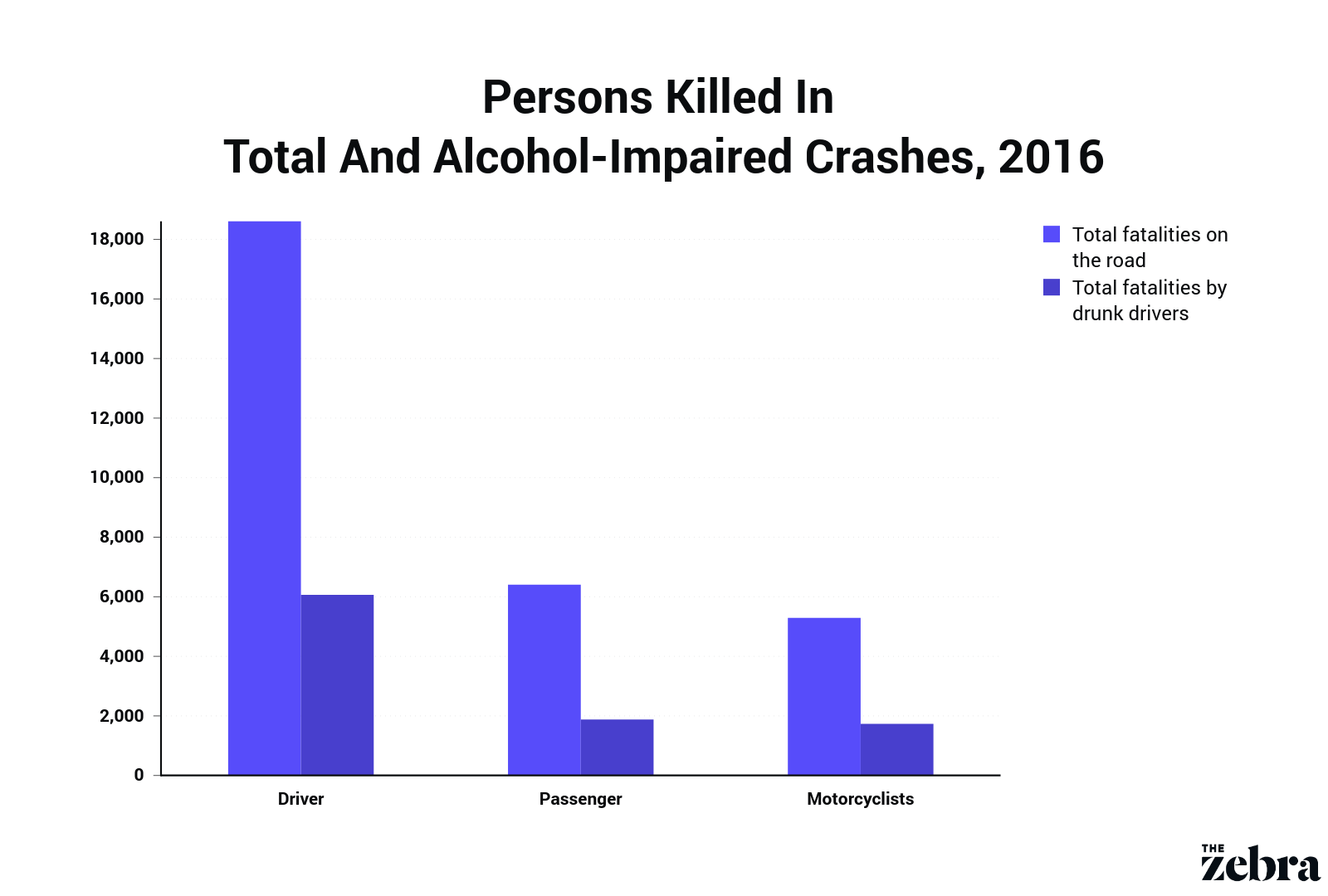 The legal, federal amount (or limit) BAC for driving safely is 0.08%. BAC stands for blood-alcohol concentration (or content) and that is a percentage of the amount of alcohol that is in a driver's bloodstream.

While police have a tool to measure BAC (a breathalyzer), the formula for calculating BAC is as follows:

While there is a federal standard for BAC, there is no standard definition for charging a driver with a DUI or DWI.

Certain states define a DWI as Driving While Intoxicated. Under those laws, there may not be a difference between a DUI and DWI charge. A driver can be charged with a DUI or DWI after failing a field sobriety test (which includes the testing of reaction time), even with a BAC below the state's legal limit. If a driver is under 21, some law enforcement policies may pursue DUI charges at blood alcohol level of 0.01%. There is no standard federal precedent concerning first-time offenders vs. repeat offenders. How you will be punished for a DUI or DWI will be determined by the individual judge in your case.

Below are the violations for receiving a dui or dwi in all 50 states:

How to prevent distracted driving

Each year in the United States, thousands lose their lives in fatal crashes caused by drunk drivers. Yet some may argue that the current awareness around the dangers of drunk driving is not enough to prevent these deaths. Below are additional facts around impaired driving and the social impact of this negative behavior.

How does a drunk driving ticket impact car insurance rates?

Getting a DUI conviction is one of the more costly mistakes a driver can make. After comparing millions of rates, The Zebra found a dui violation can increase rates by 71.0% — more than $1,000 dollars a month in insurance premiums. Moving forward, whenever you search for car insurance, you may need to file an SR-22, an additional certification that states your insurance policy meets your state’s minimum car insurance requirements. It’s normally a requirement to have a suspension lifted from your license due to a violation (like a DUI or DWI). But that's just your insurance. You can lose your driver's license, face jail time and legal fees, as well as having an ignition interlock installed in your car. On a much more personal level, if you drink and drive, someone may use a loved one. 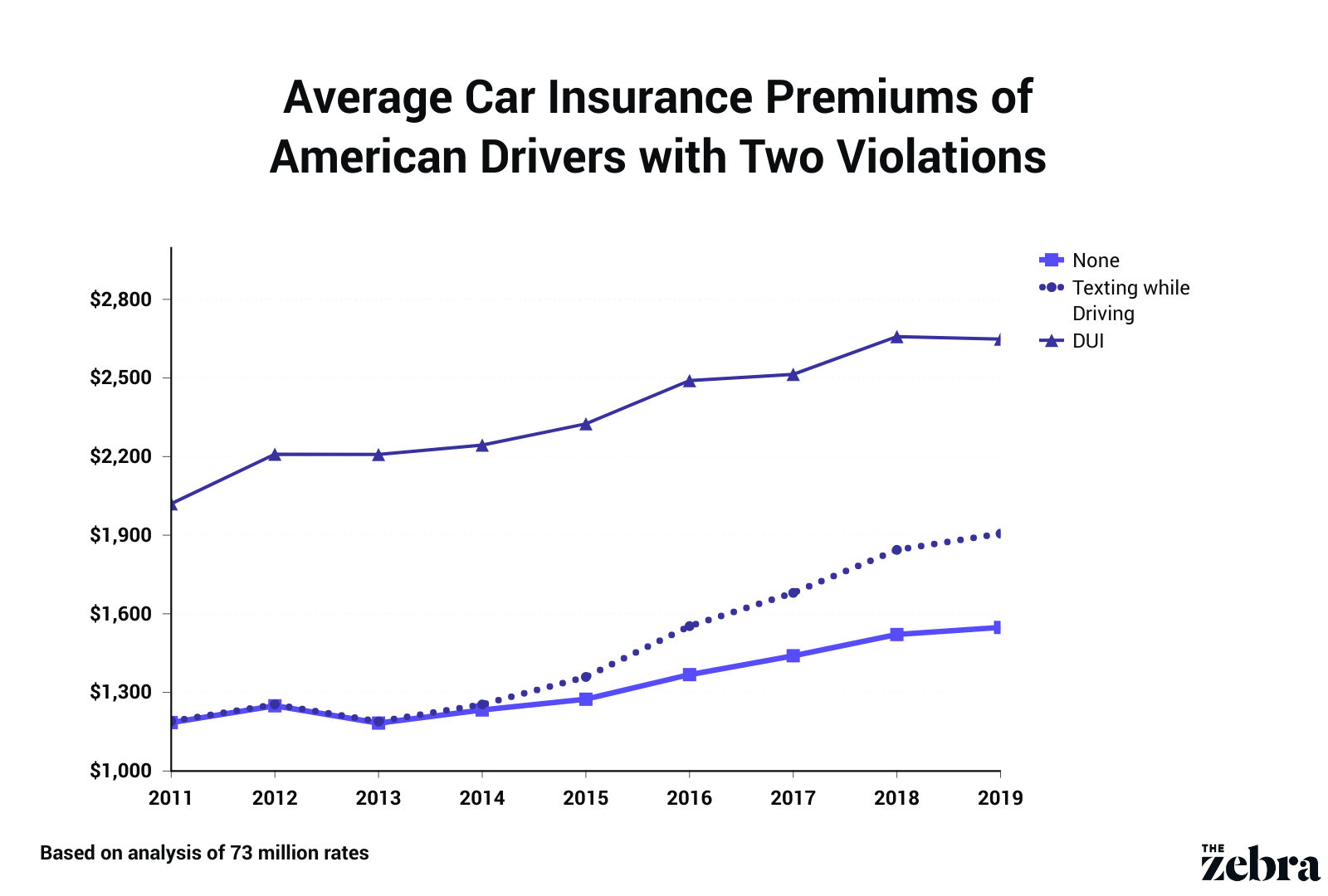 Q: How many people died from drunk driving in 2018?

A: According to NHTSA, 10,511 people died in alcohol-related accidents in 2018. In the same year, the FBI estimates over 1 million drivers were arrested for driving under the influence of alcohol or drugs.

Q: What is the percentage of drunk driving?

A: Based on a 2016 NHTSA study, 28% of all motor vehicle traffic fatalities were related to alcohol-impaired-driving.

Q: What age group has the most drunk driving accidents?

Hit with a DUI violation? Compare now and find a lower insurance rate!

This study was conducted for The Zebra using Google Consumer Surveys. The sample consisted of no less than 1,000 completed responses per question. Post-stratification weighting has been applied to ensure an accurate and reliable representation of the total population. This survey was conducted in March 2020.

25% Of College Students Have Driven Drunk In The Past Month: Study