A texting and driving ticket on your record? Compare better rates now!

A texting and driving ticket on your record? Compare better rates now!

How many people die from texting and driving?

It only takes a second, but it can have life-long repercussions. Texting and driving may seem innocent enough (and it's certainly tempting to do), but every year thousands of faultless drivers and passengers are killed due to the negligence of other drivers. As a form of distracted driving, texting while driving causes the driver to take their focus from the road and onto their hand-held device. Even while at a stoplight, this behavior can be dangerous, as drivers need to maintain total focus in order to drive safely.

14% of all fatal car crashes involve the improper use of a cellphone while driving, according to recent reports. Along with data from the NHTSA, the CDC, the NSC, and The Zebra's own proprietary data, we can further investigate the widespread problem of texting and driving.

Clearly, despite younger drivers will to text while driving, they are not the only victims in a lack of knowledge in public policy. Young drivers are aware they do not know the state law and are willing to admit it. 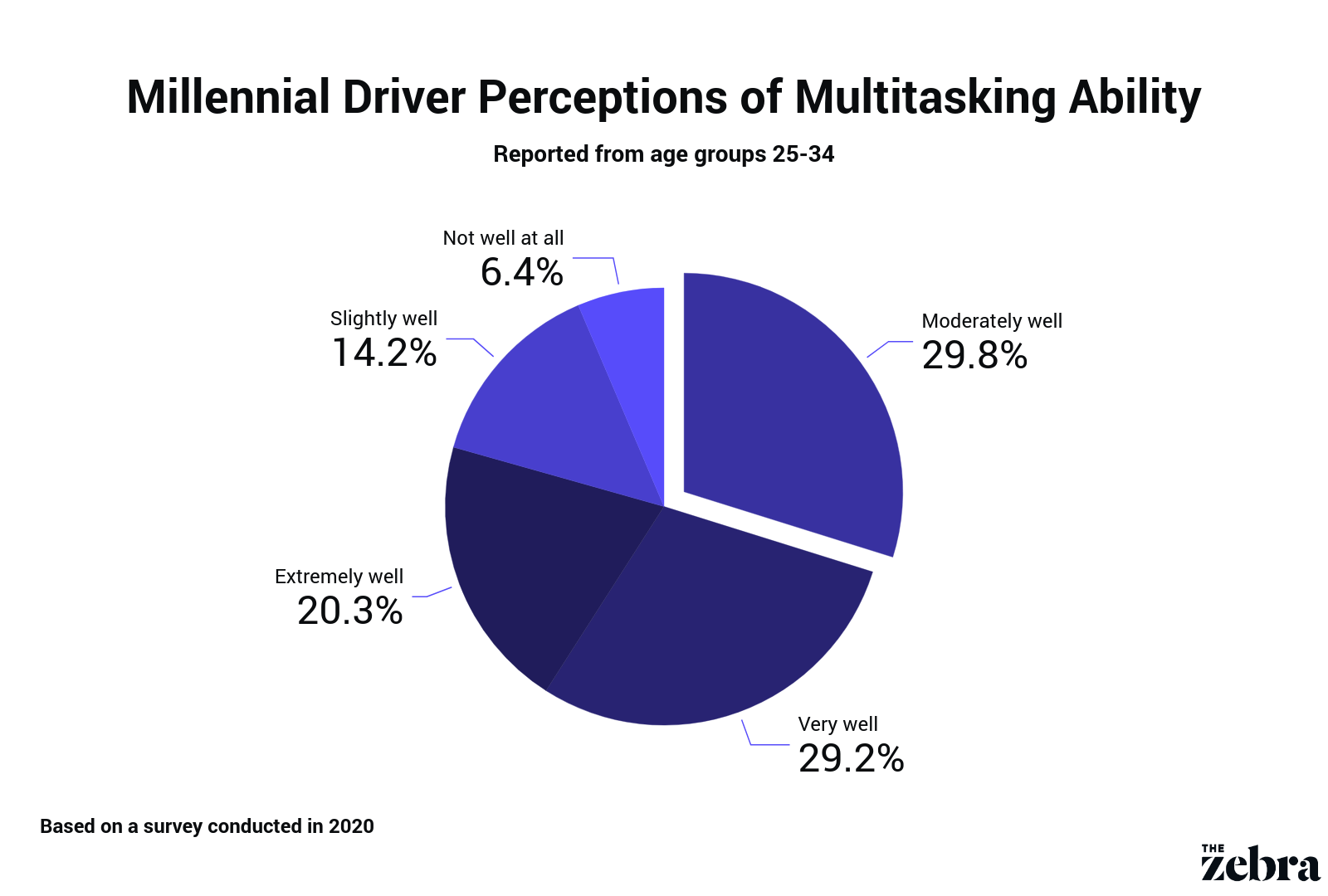 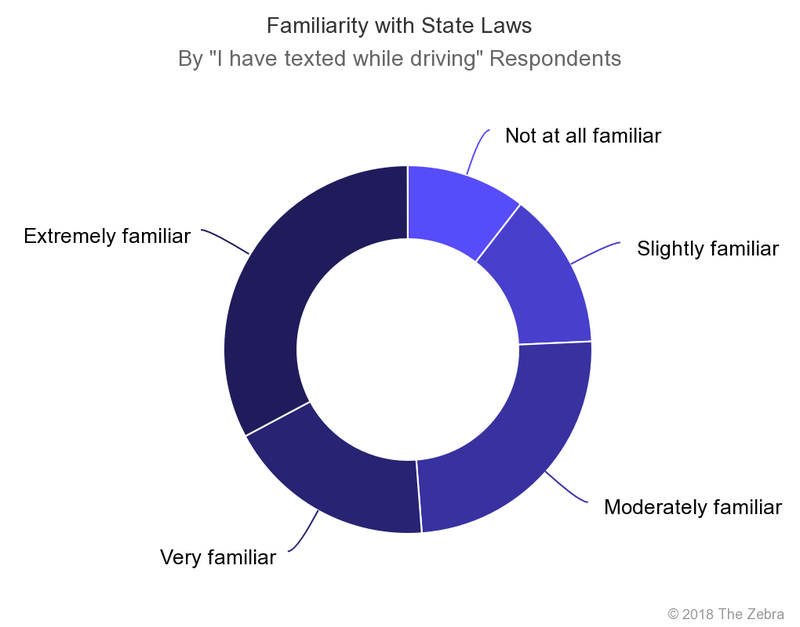 Using a GPS and sending a text message require similar behaviors and similar use of a device (including a hands-free devices or smartphone). But the use of a GPS device is more widely accepted as a benign behavior, compared to texting — despite evidence that both behaviors lead to more car accidents and instances of driver distraction.

The following data is a replication of a similar distracted driving statistics table found on the National Highway Traffic Safety Administration'sTraffic Safety Facts Research Notes from 2016.

More than half of respondents who admitted to texting while driving in The Zebra's 2018 survey have been exposed to AT&T's "It Can Wait" campaign and the dangers of distracted driving, but continue to engage in such behaviors. The Department of Transportation hasadditional dataon this phenomenon.

In 2020, getting caught texting or otherwise using your phone while driving will raise your insurance rate by an average of 23% ($356) — and in some states more than 63%. The total cost to your insurance — the rate impact on your policy for three years — for a texting-while-driving violation is $1,0731.

A ticket for distracted driving — sending a text message or using your cell phone while driving — raised a driver’s car insurance rates by 0.2% in 2011, costing the driver less than $3 per year, on average. Now, the same violation raises rates by 16% — or $226 per year.Across the country, penalties for distracted drivers range from just $2.51 (New York) to $681 (Michigan). In some cities, the penalty nears $2,000.

Please follow here for the methodology behind the acquisition of these rates. 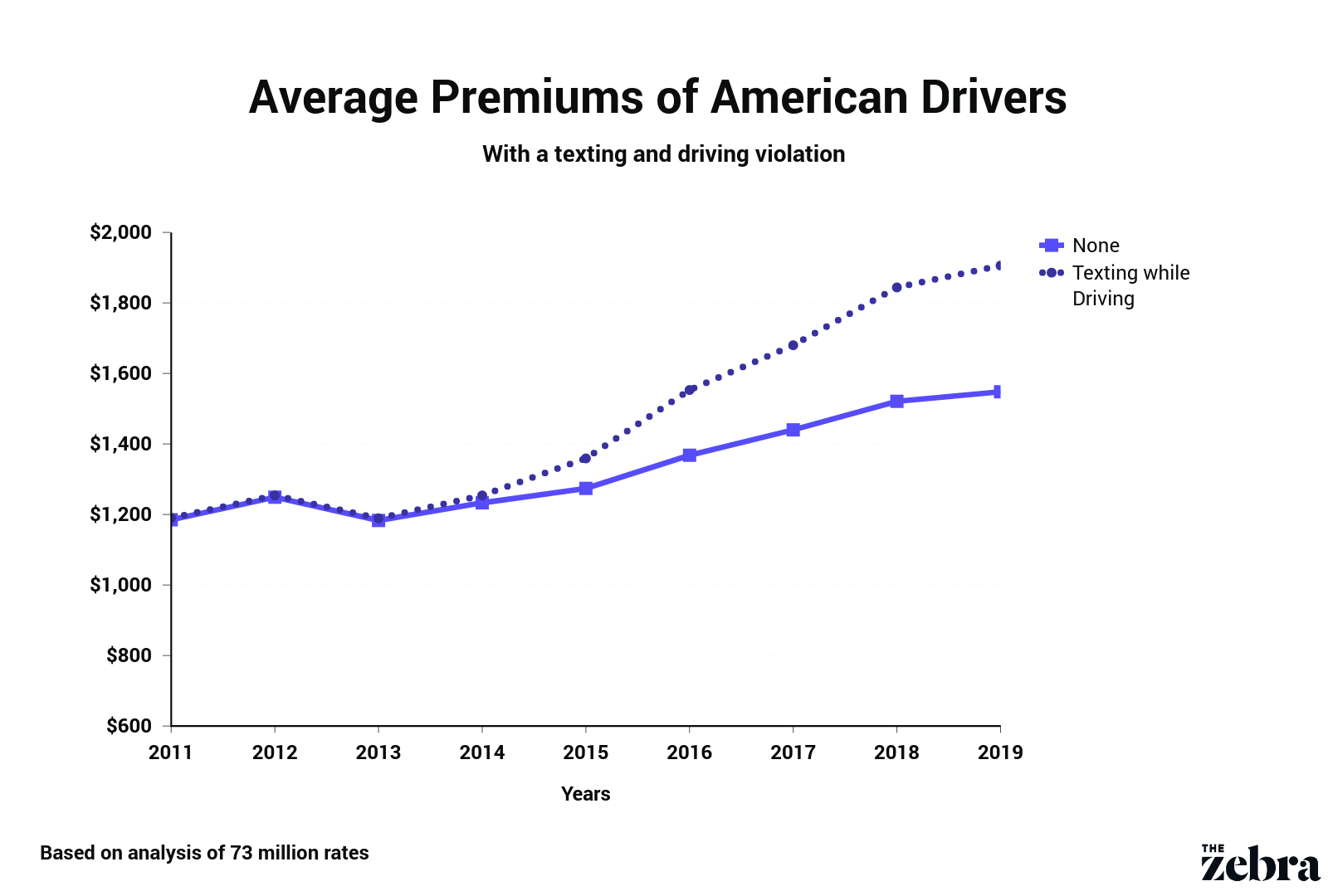 FAQs about Texting and Driving

Why is driving and texting dangerous?

Answering a text distracts a driver for approximately five seconds. At 55 miles per hour, that is enough time to travel the length of a football field. In 2017, using a cellphone while driving caused an estimated 1.5 million car crashes.

What are the effects of texting while driving?

Distracted driving is extremely dangerous and can result in accidents and devastating injuries. Your insurance premiums can also be affected, increasing 23%, or $356, on average.

How do police know if you are texting while driving?

Police officers typically pull drivers over for swerving or odd driving patterns. They will then ask if you were paying attention to the road or something else. While they could also ask to view your cellphone usage data, they would need a warrant to do so.

Who is most likely to text and drive?

Drivers aged 20 to 29 are most likely to report using a cell phone while driving.