House Fire Statistics and Facts in 2020

What causes a house fire?

Take extra care when making dinner; cooking is the leading cause of house fires in the nation. Additionally caused by faulty heating equipment and electrical malfunction, each year there’s an average of 358,000 house fires, according to the National Fire Protection Association. These fires result in 7 deaths every day. When engaging with your appliances, be sure everything is up to code and safe to use. Adhere to NFPA guidelines around open flames and you can prevent you and your family from becoming a statistic.

In this report, you will find relevant house fire statistics, including 2020 data. Compiled from national organizations, such as the U.S. Fire Administration, FEMA, and the National Fire Incident Reporting System, the following data highlights the real threat of house fires and their destructive capabilities. With support from The Zebra’s own proprietary data, we can examine the prevalence and economic impact of these common disasters.

In October of 2020, The Zebra surveyed 1,500 Americans to gain insight into the basic fire safety knowledge and practices of the average US citizen. As a result, The Zebra found that most Americans are aware of proper fire prevention procedures and have done a good job protecting their homes from a potential fire.

While many practice safe habits, others are still unaware of the potential dangers of a house fire, and other methods of fire prevention. 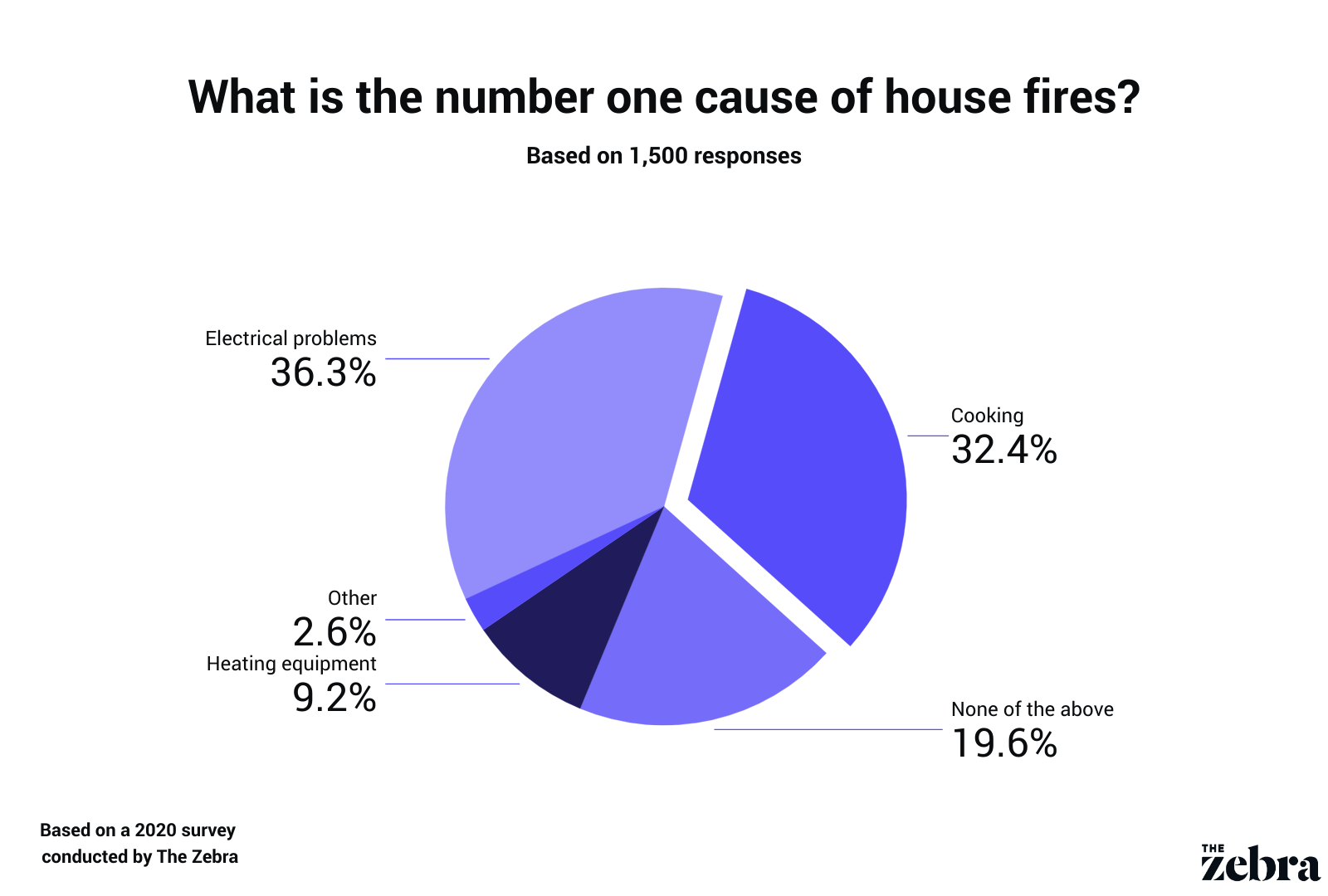 According to the Center for Disease Control, the U.S. Fire Administration, and the National Fire Protection Association (NFPA):

From national databases within government entities such as the U.S. Fire Administration and NFPA, and the Insurance Information Institute:

What causes house fires? - the facts

Even one death due to a house fire is too many. Review these fire safety tips and install the proper fire prevention measures in your house. If you’d like more information, the National Safety Council has additional details on how to keep your home safe.

How does a house fire claim affect your homeowners insurance?

As these are common occurrences, accidental house fires caused by things like faulty appliances and electrical wiring are among the standard risks covered by homeowners insurance.

The dwelling and other structures portions of your homeowners insurance would pay out to repair or replace your property, along with any detached structures near your home, if they are lost in a residential fire. The following are endorsements you can add to your policy that would extend the coverage limit in the event your standard limit won't be enough to fully restore your loss.

If your home becomes inhabitable following a loss and is need of repair, loss of use (sometimes called additional living expenses) covers your expenses when you need to find another place to stay. It generally covers hotel and lodging costs, but may also cover food and fuel, depending on your policy. 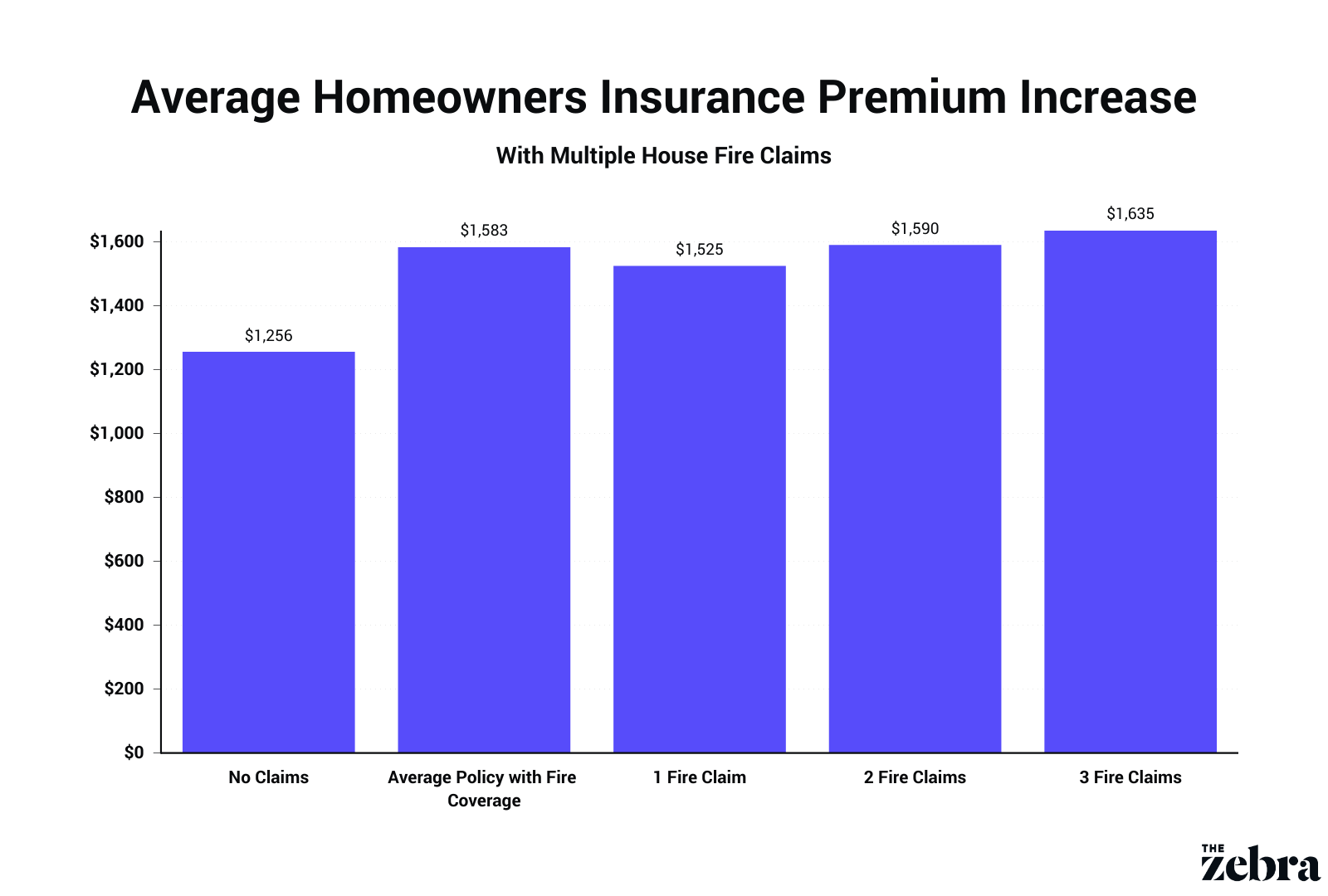 If you're looking for cheap homeowners insurance after a wildfire claim, take a look at some of the post-fire claim rates from top insurance companies below to get started in your search. Remember that our rate-gathering methodology likely does not match your own homeowners profile exactly.

With a monthly premium of $109, State Farm proved to be the cheapest company after a fire incident. Liberty Mutual and USAA are also worth looking into if you're concerned with the affordability of your rate after a fire claim.

Question: What percentage of fire deaths occur in the home?

Answer: 79% of fire deaths and 73% of all reported fire injuries were caused by home fires, according to the NFPA.

Q: How common is a house fire?

A: According to the Insurance Information Institute, a home fire occurs every 87 seconds.

Q: How many house fires are caused by fireplaces?

Q: How many house fires occur every day in the United States?