What is the root of aggressive driving?

Aggressive driving, also called more commonly as “road rage”, is dangerous and negative behavior drivers engage in for a variety of reasons. Oftentimes, the driver is drunk (already making poor decisions), suffering from a mental breakdown or emotional strain, or simply just late and needs to get somewhere fast. While none of these are acceptable reasons for putting yourself and others at risk, road rage is all too common.

The Zebra has collected data from trusted sources, such as the National Highway Traffic Safety Administration (NHTSA), the American Psychological Association, and the American Automobile Association to report on the most recent and useful aggressive driving statistics. Additional data on road rage can be found in our annual survey looking at aggressive driving behavior in the United States.

Everyone has had a moment of frustration while driving. Whether it be due to traffic or the poor decisions of other drivers, that flash of anger can easily ruin our day. But for some, that anger lasts much longer than an instant and can lead to some disastrous consequences.

In March of 2021, The Zebra looked at the driving behaviors of 1,500 Americans and identified several insights around road rage and aggressive driving.

In May 2020, The Zebra, the nation's leading insurance comparison site, conducted a national survey on 1,500 Americans to better understand this "road rage" phenomenon. 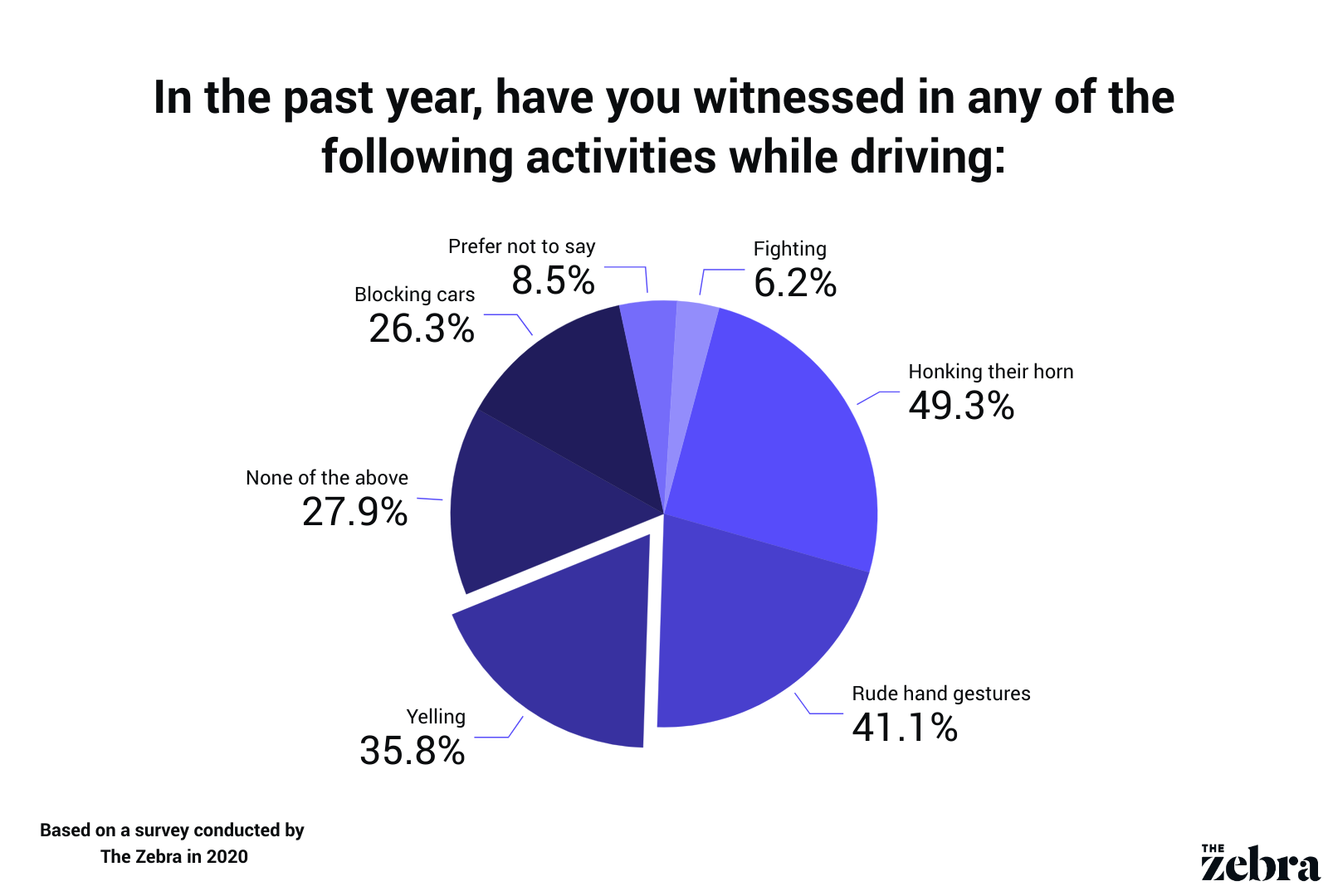 This new data also indicates a concerning lack of action taken by most Americans, despite knowing the dangers of road rage.

Perhaps this discrepancy comes down to varying beliefs regarding how road rage is defined.

If you find yourself frustrated behind the wheel, our research shows these as the top ways to relax after a road rage incident.

In October of 2019, The Zebra surveyed Americans across the United States for their opinions and behaviors regarding road rage. The following data points are taken from the aforementioned survey.

Road rage in the United States: a statistical overview

The following data is taken from the National Highway Traffic Safety Administration.

The following statistics are taken from an analysis of FARS data done by Auto Insurance Center and the AAA Foundation for Traffic Safety.

According to the NHTSA's Fatality Analysis Reporting System, there was about one deadly accident related to road rage per day in 2016. The following statistics are taken from an analysis of FARS data done by Auto Insurance Center and the AAA Foundation for Traffic Safety. Here are the top ten states with the most deaths related to road rage or aggressive driving in 2016:

It's usually assumed younger and less experienced drivers are involved in the greatest number of accidents. The Zebra's 2019 survey proved that to be true. 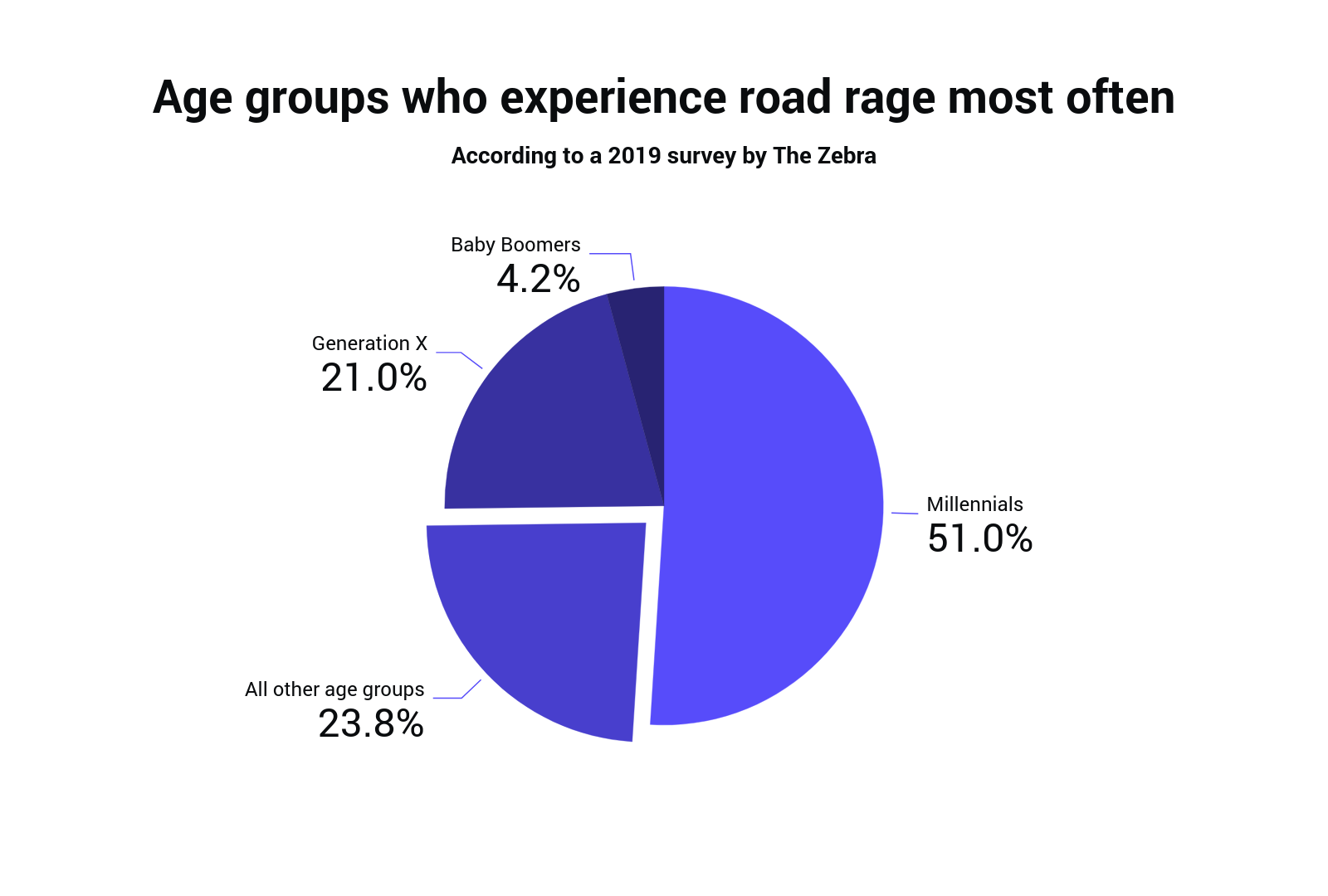 According to the NHTSA:

The following data was sourced from the American Automobile Association:

The Trace, a nonprofit news organization focused on gun violence, found that:

Road rage can lead to aggressive driving, a behavior that may have legal ramifications and fiscal downsides, especially where car insurance is concerned. Reckless driving is generally defined as careless driving, improper driving, excessive speed, or driving without due care and attention. A reckless driving citation is costly from an insurance perspective. Since 2012, insurance rates for driving violations (speeding, running red lights, racing, etc.) are on the rise.  In 2020, reckless driving increases your premiums to $2,389 a year, a 61% jump. Q: What percentage of accidents are caused by road rage?

According to the Insurance Information Institute, aggressive driving played a role in 56% of fatal crashes from 2003 through 2007.

Q: How many accidents are caused by road rage each year?

According to SafeMotorist, a total of 12,610 injuries and 218 murders have been attributed to road rage over a seven-year period in the United States.

Q: What is the most common road rage?

According to The Zebra, the most common act of road rage witnessed by American drivers was another driver honking their car horns in anger (48.3%).

Q: How much has road rage increased since 1990?

Got a road rage history? Compare insurance now to save on your premium!